First, let’s take a look back at what happened in 2017 in terms of the inventory, demand, expected market time, luxury properties, and distressed properties.

Active Inventory: A chronic lack of inventory defined 2017 and the year finished at levels not seen since 2013.
The year started with an active inventory of 4,071 homes on the market and ended with 3,560. It was the second lowest start to a year behind 2013. Ever since the Great Recession, the trend has been fewer homeowners selling their homes. Since 2009, the number of homes placed on the market has diminished by 28% compared to the heydays of 2000 through 2007. In 2017, the issue was magnified with 6% fewer homes coming on the market compared to 2016.Cutting into the inventory a bit were closed sales. In 2017, closed sales were nearly identical to 2016 despite fewer homes coming on the market.The active inventory did not really climb much. The theme throughout the year was the anemic feel to the housing inventory. There just were not enough homes on the market below $1 million (82% of all closed sales in 2017 could be found below $1 million) and the market remained hot all year long for this range. The peak in the active inventory was reached in mid-July with 5,983 homes on the market. That was the lowest peak in decades. Last year’s peak of 7,329 homes, 22% higher, was also reached in mid-July. Typically, the peak is attained in mid-August, but there have not been enough homes coming on the market during the summer months compared to prior years.

The active inventory has remained at anemically low levels since the start of 2012 and has been a seller’s market ever since. The long-term active listing inventory average is 8,000 homes, and it has only reached that level for a few weeks in the summer of 2014.

In order for the market to start tilting in the buyer’s favor, the active inventory not only has to eclipse the 8,000 home mark; it needs to remain consistently above that threshold for a sustained period of time. Only when there is extra supply will appreciation slow. Until then, we can expect more of the same, slow methodical appreciation. 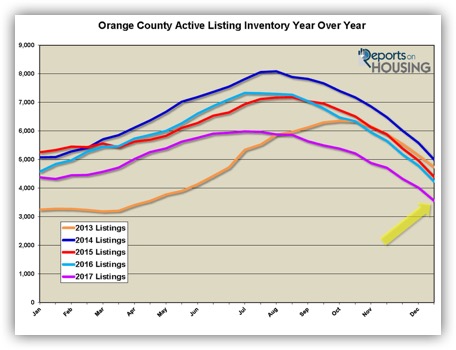 Residential resale homes in Orange County have been appreciating at a pretty solid 5% clip for three years now. In spite of the chronically anemic supply of homes, sellers still did not get away with stretching the asking price. Buyers were willing to stretch a bit, especially for detached homes priced below $750,000 and for condominiums priced below $500,000. Yet, sellers who were a bit too overzealous and pumped up their prices ultimately sat on the market until they made an adjustment more in line with their true Fair Market Value.

The inventory grew by only 37% from January through July. With not enough homes coming on the market all year, coupled with the same number of closed sales as 2016, the inventory dropped by 40% by the end of 2017. In the past two weeks alone, the inventory has shed 12%, 463 homes, and now totals 3,560, the lowest level since April 2013. Over the past thirteen years, only 2013 had fewer homes to start a New Year with 3,161. Home price appreciation and hot market expectations that favor sellers has everything to do with supply and demand. With such an extremely low supply, 2018 is definitely starting on the right foot.

Demand:  With historically low-interest rates around 4%, demand continued to thrive in Orange County.
Demand for Orange County homes (the number of pending sales over the prior month) followed a normal strong housing pattern. The local housing market revved its massive engine in February, and by April, another strong housing market emerged with plenty of activity. Demand remained elevated and strong throughout the Spring and Summer Markets and did not cool until September, the Autumn Market. Of course, demand slowed considerably from Thanksgiving on, typical for the Holiday Market.

Interest rates remained low and have not really changed much over the past few years, even dipping below the 4% level for a period of time in 2017. Investors from around the world continue to invest in long-term government bonds, especially the United States treasuries. As a result, interest rates have remained at historical lows and do not appear to be changing much anytime soon. Despite higher prices in Orange County, the low-interest rates environment has helped home affordability and buyers have been taking advantage of it.

Even though the median sales price has surpassed 2007 record levels, homes are still more affordable due to favorable interest rates. For proper perspective, in 1990 the interest rate was at 10%. In 2000, it was 8%. And, just prior to the Great Recession, interest rates were at 6.4%. A $650,000 mortgage at 4% has a payment of $3,103. Compare that to a payment of $4,066 at 6.4%. It is no wonder that buyers are still flocking to purchase even with home values rising to record levels.Low-interest rates are facilitating affordability and propping up demand.

Luxury End:  More homes sold in the luxury end this year than ever before.
Orange County’s luxury home market continues to pump on all cylinders. More homes have closed above $1.25 million than ever before in the county. There were 3,895 closed luxury sales compared to 3,249 last year, up 20%. The highest level prior to the recession occurred in 2005 with 2,857 closes sales. It is safe to say that the luxury housing market in Orange County is on solid footing.

Despite the record number of closed sales in the luxury range, the market still felt sluggish compared to the lower ranges. That was simply due to supply and demand. With the exception of homes priced between $1.25 and $1.5 million, the expected market time soared to levels considered buyer market territory. There simply were not enough buyers actively looking to buy. On the other hand, there were plenty of sellers competing with each other, the higher the price, the slower the market. Homes did not fly off the market with multiple offers like the lower ranges.

Year over year, the luxury inventory tracked about the same in terms of inventory. Luxury demand was considerably strong during the spring, 36% higher in April compared to 2016. By year’s end, demand was almost identical.

Distressed Properties: Foreclosures and short sales are nothing more than an asterisk to the 2017 market.
In Orange County, homes have appreciated substantially since the beginning of 2012. With a six-year run in housing, the number of underwater homes has declined to 1.2% of all homes with a mortgage. During the Great Recession, the number climbed to as high as 25%. In 2017, distressed sales were nothing more than an asterisk to an overall healthy, nearly recovered housing market, almost not worth mentioning in reviewing 2017.Back in 2012, distressed homes accounted for 36% of closed sales. In 2017, with over 31,000 closed sales, there were only 274 foreclosures or 0.9%. And, there were only 342 closed short sales, or 1.1%. That means that 98% of all closed sales were good ol’ fashioned homeowners with equity.The distressed active listing inventory started the year at 112 total foreclosures and short sales and ended the year at 61, a 44% drop.

Expected Market Time: Based upon the low inventory and hot demand, it was a solid seller’s market the entire year.
The expected market time (the length of time it would take to place a home into escrow based upon current supply and demand) remained below the 90-day mark all year, continuously tipping in the seller’s favor. It dipped below 60 days, a HOT seller’s market where homes appreciate at a faster clip, from February through May, the longest stretch since 2013.  Since then, the expected market time has not risen that much. For buyers looking to purchase below $1 million, they simply have not had a break. Multiple offers have been the norm all year long. 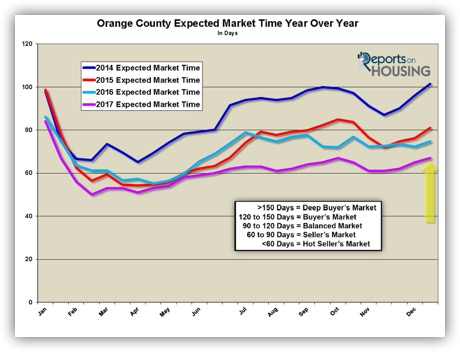 Orange County has not experienced equilibrium, a market that does not favor a buyer or seller, between 3 and 4 months, since the second half of 2014. It has not been a buyer’s market, above the 4-month mark, since the start of 2011.
The 2018 Forecast: More of the same.
There have not been many changes to the U.S. economy. No shocks to the economic engine. That all changed with the new tax bill that was signed into law on December 22nd. The mortgage interest deduction was lowered from $1 million to $750,000. Equity lines of credit are no longer deductible. State and local property taxes deductions are capped at $10,000. The cards seem to be stacked against Californians and, more specifically, Orange County residents. Yet, with a chronically anemic inventory and demand juiced by historically low-interest rates, the tax bill will not have a major impact on the local housing market like so many fear. Here is the forecast:
The bottom line, 2018 will fill a whole lot like 2017 with not enough homes on the market and buyers tripping over each other to purchase. Multiple offers will be the norm for homes priced below $1 million. Once again, the market will heavily favor sellers and buyers will have to pack their patience in order to isolate their piece of the American Dream. 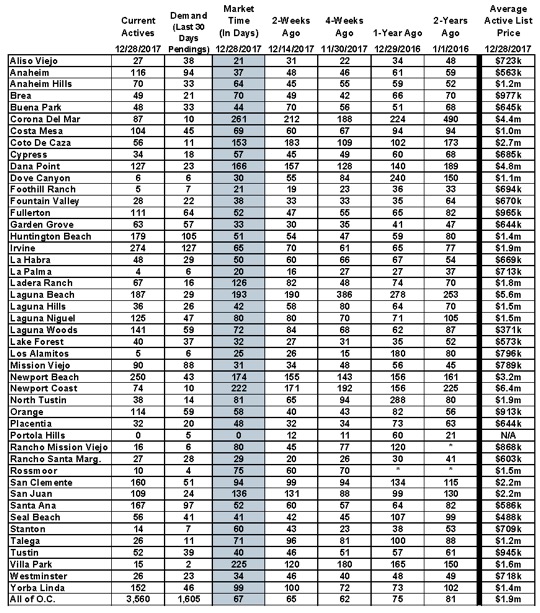 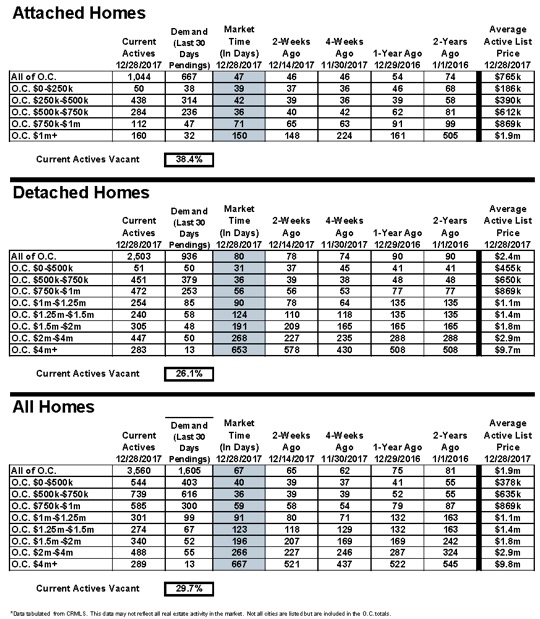 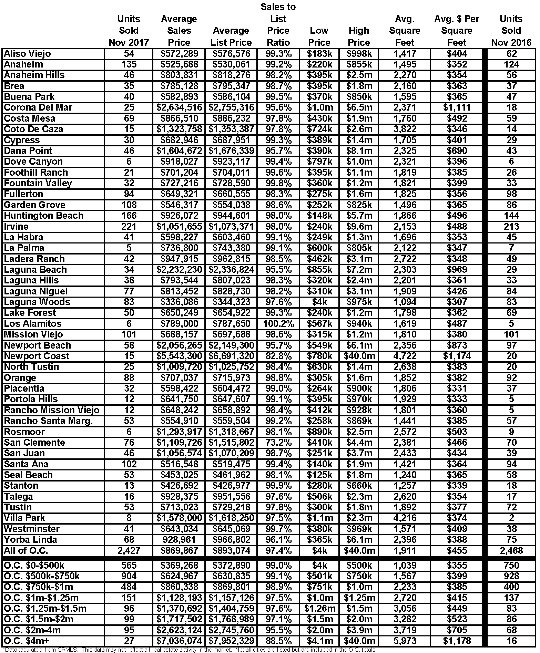 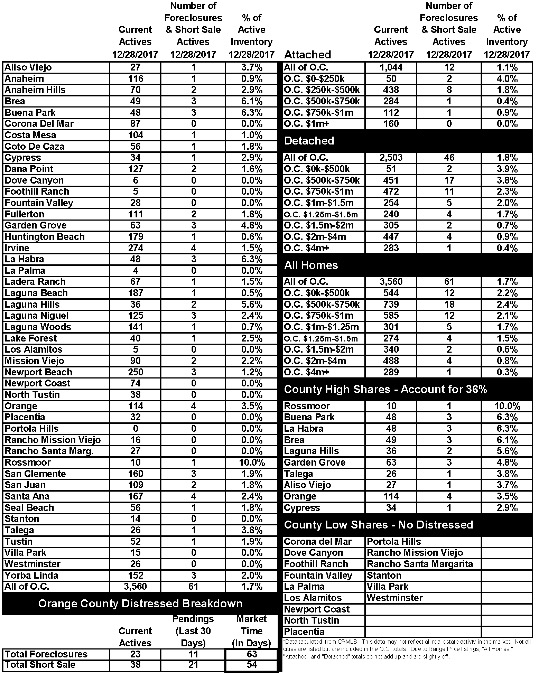 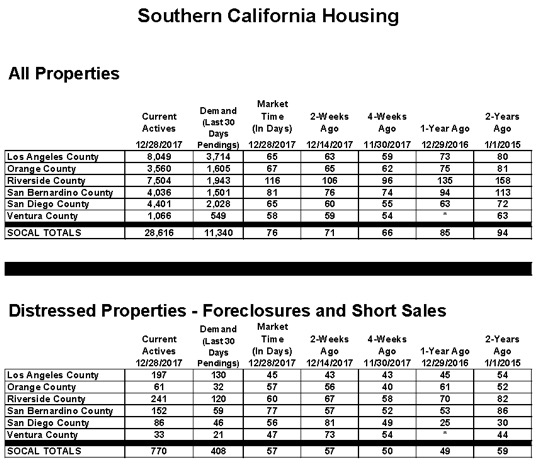